Both women and men are impacted by domestic violence

1 in 16 (0.5 million) men have experienced physical and/or sexual violence by a cohabiting partner since age 15

Children and young people who experience family violence are affected in some way. Such exposure has long-term psychological, emotional and behavioural consequences.

Domestic and family violence affects not only the victims themselves, but the children who witness it, extended families, friends, workplaces and ultimately the whole Australian community. [ii] 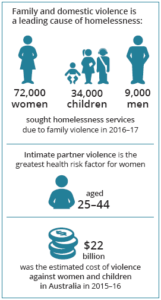 The Act says a child is also a victim of the violence if it hears, witnesses or is otherwise exposed to such behaviour or its effects (e.g. a distressed adult, an injured person, damage to property).[iv]

A woman dies at the hands of a current or former partner almost every week in Australia.[v]

Family violence directly contravenes Australia’s commitment to the United Nations Declaration of Human Rights, the Convention on the Elimination of All Forms of Discrimination Against Women (CEDAW), and the Rights of the Child. As a signatory to CEDAW,all Australian governments must continue to implement policies and programs to eradicate discrimination in all its forms, against all women. [vii]

Children and young people are also affected by violence against women. Exposure to violence against their mothers or other caregivers causes profound harm to children, with potential impacts on attitudes to relationships and violence, as well as behavioral, cognitive and emotional functioning, social development, and – through a process of ‘negative chain effects’ – education and later employment prospects. [viii]

If you are experiencing domestic and family violence, or have experienced sexual assault, seek support, call 1800 RESPECT (1800 737 732).